淨源茶
New Taipei City won the double crown in the first national organic tea competition. Mayor Youyi Hou looks forward to promoting organic tea all over Taiwan.
「第一屆2020年全國有機茶TAGs分類分級評鑑」於6/8圓滿落幕，6/13在台北希望廣場舉行頒獎典禮。今年首次舉辦的全國性有機茶賽事，共有13個縣市、82位有機茶農參與條形包種茶、球形烏龍茶評比，兩類茶的最高獎項皆由新北市拔得頭籌，新北市市長侯友宜特別親臨頒獎鼓勵。
The first 「Taiwan TAGs Organic Tea Award」was held in 2020" had been accomplished on June 8, and the award ceremony was held at Taipei Hope Plaza on June 13. The first national organic tea competition, a total of 82 organic tea farmers from 13 cities participated in the twist shape pouchong tea and ball shape oolong tea competition. The highest award for both types of tea was won by New Taipei City, and the Mayor Youyi Hou of New Taipei City attended the award ceremony in person to encourage the participants and award prizes. 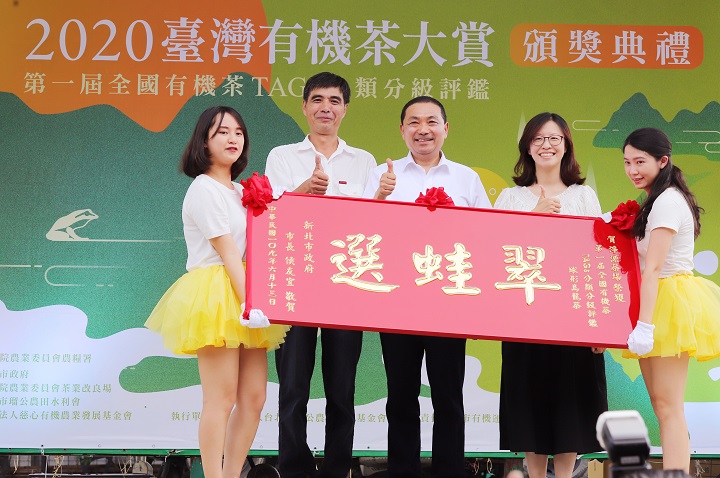 Mayor Youyi Hou is very happy that New Taipei City has won two championships, and hopes that such an excellent agricultural product can be promoted to every city in Taiwan. "Especially in the post-epidemic era, organic tea promotion can revitalize the economy. During the Dragon Boat Festival, it is recommended that eating rice dumplings with tea, preferably with organic tea, to help keep the health of the stomach and intestines.”
Mayor Hou said that he also likes to drink tea very much, because when he was in the duty of police officers, he stayed up late to handle cases. His colleague will make tea for refreshing, and he will drink some. After the awards were presented, Mayor Hou spent some time to sit down and taste the champion tea, the ball shape oolong tea from Ching Yuan Tea Factory. 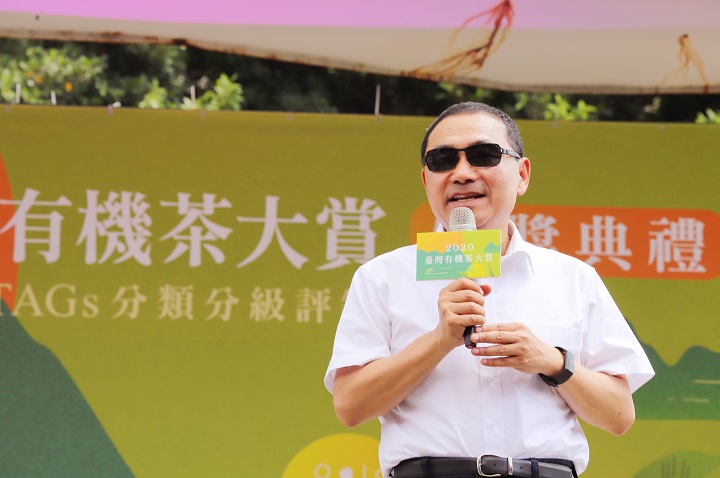 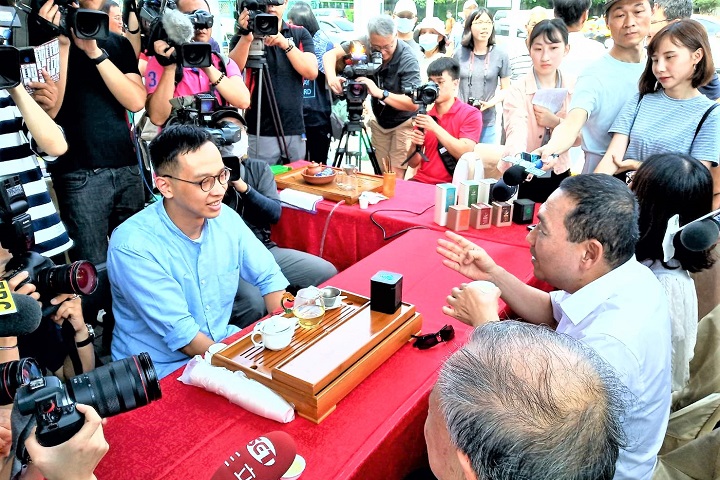 ●侯市長頒獎後留下來品茗得獎茶，由淨源茶場茶師陳芃均掌席。Mayor Hou tasted the champion tea after the award was presented, and Tea Maker Chen Pengjun from Ching Yuan Tea Factory brewed tea for him.

The New Taipei City Agriculture Bureau stated that Ching Yuan Tea Factory established in 2009 in Ping-lin. Ching Yuan Tea Factory has promoted organic tea education and guidance, tea garden management, tea making technology, marketing and sales in the Pinglin Tea District, the water source protection area, for more than a decade. In this competition, ten tea samples all won the prizes, and the winning records are 1 Jade, 2 Gold, 2 Silver and 5 Bronze.
Chen Lifang, the director of Ching Yuan Tea Factory, was unexpected and surprised to win the championship: "Because Pinglin's altitude is not high, and our floral oolong tea is fermented more heavier. It is different from the traditional floral oolong tea in the past. However, tea is consumption goods, as long as consumers like this kind of tea, it is considered as good tea. The award represents the confirmation of our tea making technology. In the future, we will work harder to improve our technology." Director Chen is very grateful to the farmers and the teachers who guide the tea making technology, and all the warriors who work hard on the organic road. Hope that organic tea can be seen by more people, and more tea farms can be converted into organic, so that the ecology and environment can be developed sustainably. 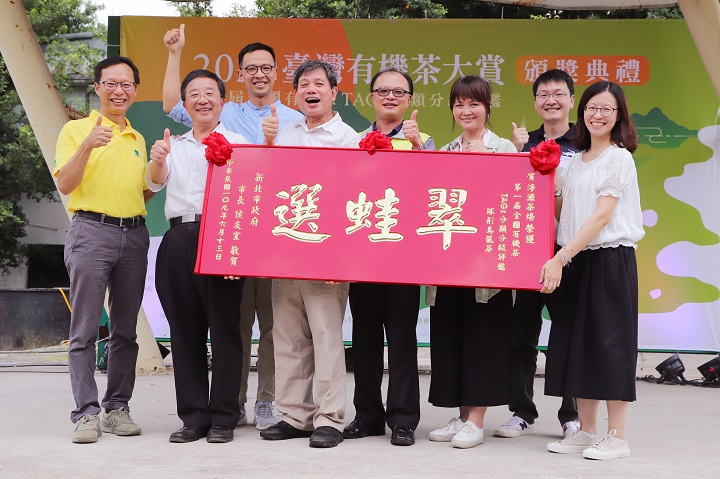 選茶如選香水，喜歡什麼香味就選它，不一定是金或銀
Choosing tea is like choosing perfume, choose what fragrance you like, not necessarily a award winning product.

The award-winning tea booths were set up at the awards venue, where you can taste various kinds of tea on the spot. The most frequently asked question is: "What is the difference between the champion and runner-up tea?" Li Xiaocui, Shifang Organic Tea Factory, who won both gold and silver : "The difference is that the gold medal has a strong flavor and the silver medal has a smooth aroma." Mr. Chen Dinghong has unique insights, and feels that tea and perfume are very similar. There are many flavors. Choose what you like, not necessarily to choose gold or silver award tea. 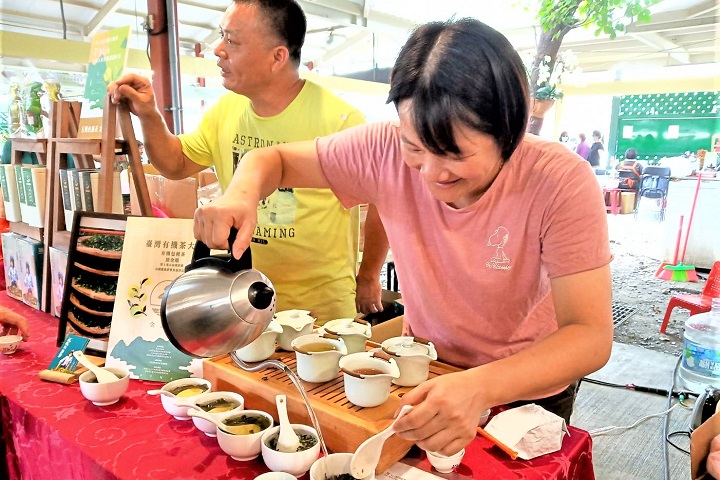 ●世芳有機茗茶園李曉翠在會場泡茶給民眾品嚐，並介紹要如何挑選喜歡的茶。Li Xiaocui from Shifang Organic Tea Factory brewed tea for the public at the venue and introduced how to choose the tea. 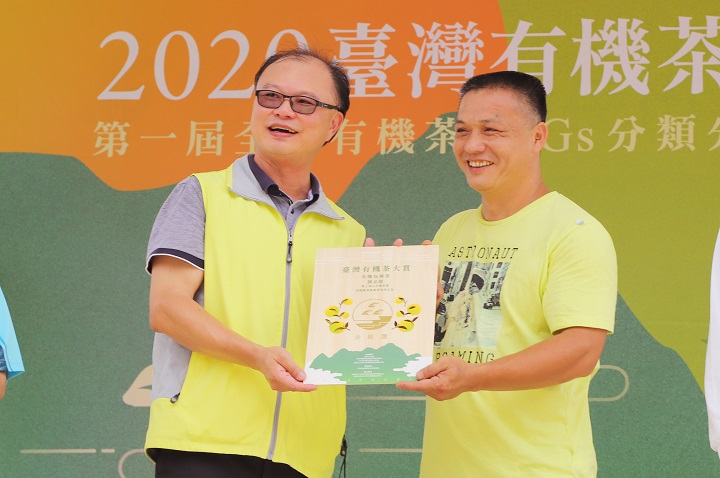 The awards were categorized by the ecological indicators of the tea farm, jade tree frogs, including the jade frog selection, the gold frog selection, the silver frog selection, and the bronze frog selection. They replaced the general rankings of a tea competition, like first prize, second prize, and third prize. A general tea competition is very competitive, and this first national organic tea competition is based on " TAGs, Taiwan-tea Assortment & Grading system ".  It focused on the "classification and category". Inside the tea tin package, there is a flavor wheel card, designed and researched by Tea Research and Extension Station. It indicates the tea has been approved by professional evaluation, and represents an autobiography of the tea. It clearly introduces the aroma and taste of the organic tea, so that consumers can easily understand the characteristics of each tea and it can become a guideline for purchasing. 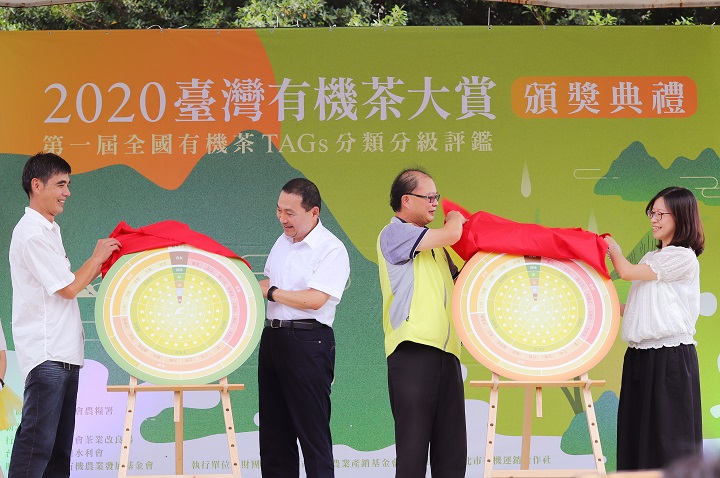 Su Murong, the CEO of Tse-Xin Foundation, one of the organizers, strongly supports the evaluation of organic tea. He believes that the tea approved by experts is good quality and fair price. We can drink it with ease mind, and it can be a perfect choice of decent present for your friends. The encouragement to the organic farmers will continue to improve tea making skills. The most valuable thing is that the more people drink organic tea, the more people will grow organic tea. The land, water and ecology in Taiwan are directly protected. CEO Su also hoped that organic tea could enter into the international competition in the future, making foreign tea farmers want to join the competition. The thousand years of tea culture can be shared with the world. Organic tea with significant meaning of health and ecological conservation can be tasted to people around the world. 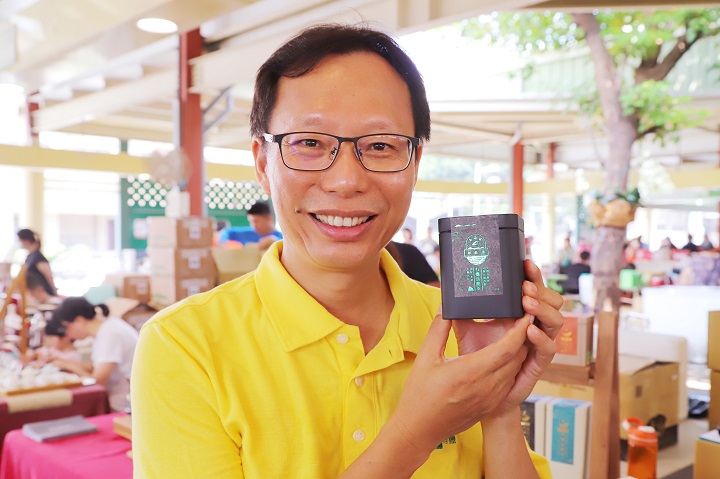 ●慈心基金會執行長蘇慕容期待未來有機茶可以打進國際賽。 Su Murong, CEO of Tse-Xin Foundation, expects organic tea can enter into the international competition in the near future. 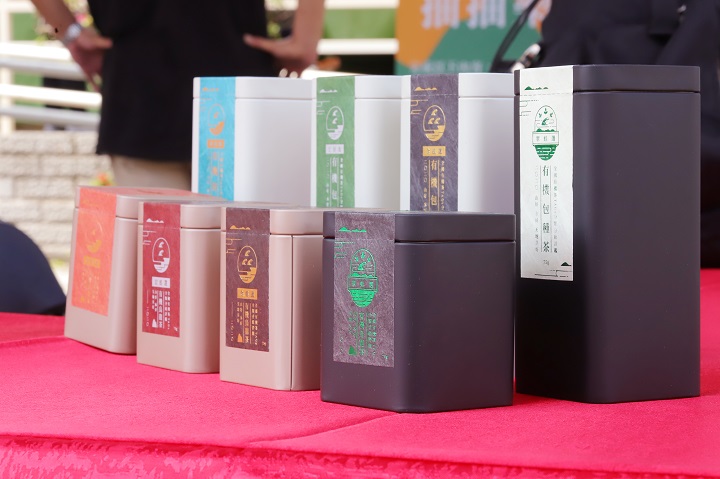