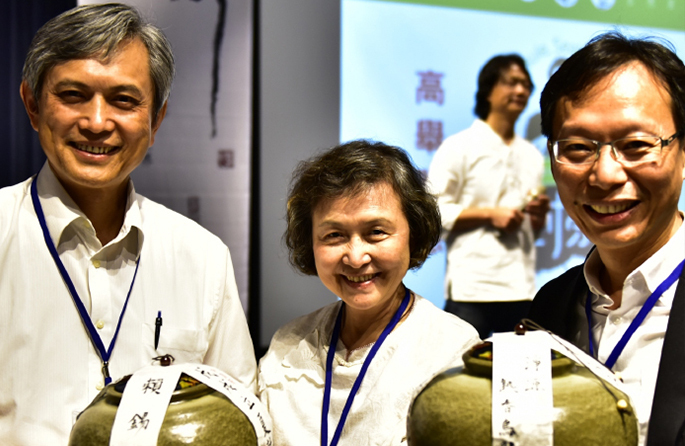 It has been ten years since “Ching Yuan Project” was initiated to purify the source of Fei-Tsui reservoir in Pinglin district. During the process from production to marketing, Tse-Xin has met various challenges. Thanks to assistance from many people, the project is allowed to make annual progress. Entrepreneurs’ adoptions of tea plantations are particularly helpful in terms of propagation of organic tea. In order to reflect the history of Ching Yuan Tea as well as appreciating supports from entrepreneurs and many others, Tse-Xin held a tea sealing event centering on “Purify Spring to the Best, Purify Spring Every Moment”, meaning “respect the source of lives every moment, appreciate what we have every second.”

At the event, nearly hundreds of participants from entrepreneurs and governmental institutions joined Tse-Xin to look back the decade-year-old history. Fourteen well-known tea makers personally brewed the 10th anniversary classic tea at each table. During the tea tasting, Dream Lotus Chinese Orchestra played ancient melody to express three stages of changes of tea leaves during sealing, “Freshness, Turn, Richness”. While appreciating beautiful melody, the 7th and 9th president of International Sans Self Tea Gathering Yi-Han Chen and Chun-Shu Wang shared their thoughts on tea and lives and methods of repository of tea. 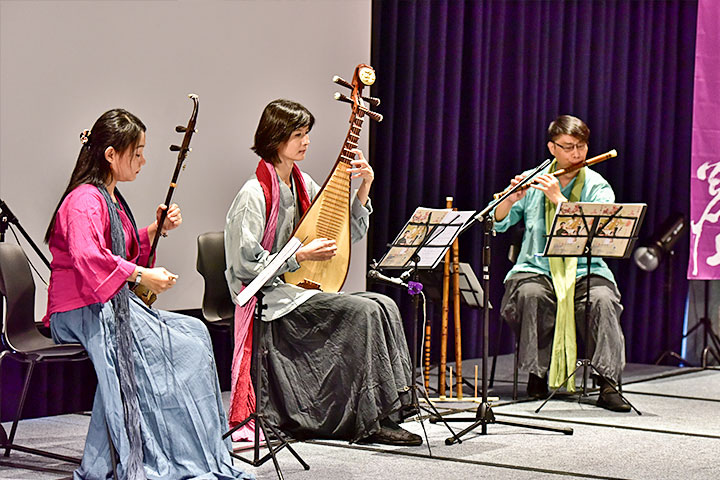 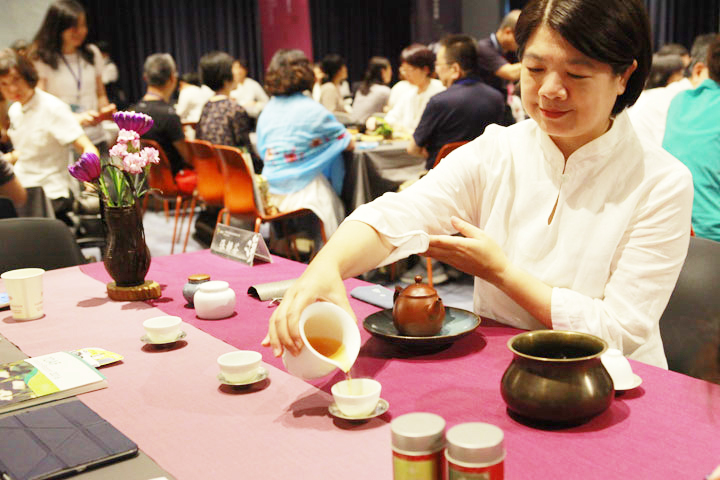 As giving speeches, the chairman of Tse-Xin Organic Agriculture Foundation Xi-Yuan Lai express how touched they have felt for the Ching Yuan Project within the decade, “Our founder promoted plantation of organic tea based on his aspiration ‘Recover the Land, Purify the Mind’. However, hundreds of hectares of Pinglin tea district were unable to be transformed into organic farming. Tse-Xin played the role similar to a light igniter to lead and point out the way by ourselves to cultivate farmers’ faith in planting organic tea. By purifying the original source, Ching Yuan Tea not only cleanses water supplied for six million citizens in whole Taipei Area but also protects the ecosystem. What’s more, the development of organic tea industry gets younger generations to see hopes and become willing to return to their hometown. We sincerely appreciate everyone’s support and hope that we can continue to work together hand in hand.” 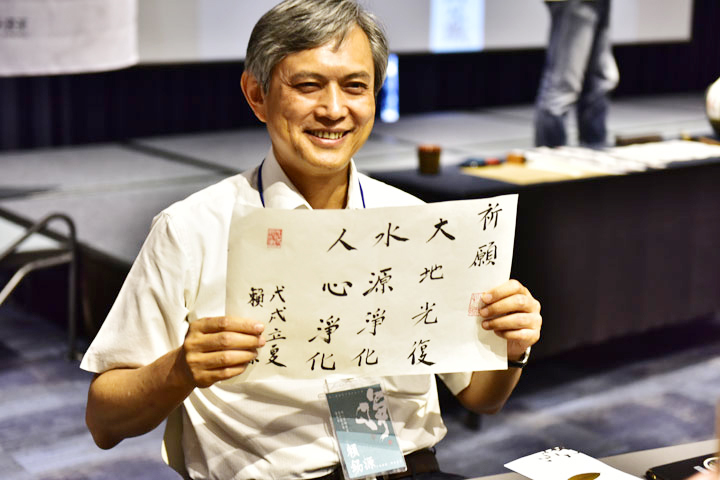 At the initial stage of promoting Ching Yuan Project, every work started from the very beginning and faced many challenges, including establishment of organic tea making plantations, training of tea makers, employment of tea leaves pickers, marketing strategies, and so on. CEO of Tse-Xin Organic Agriculture Foundation Mu-Rong Su reflected the past decade of promotion and concluded that a large amount of challenges have been conquered, nine techniques of tea making have been learned, and three domestic and international certifications have been acquired. Several years of eco-friendly farming enable local ecology to be abundant. Take spiders as examples, merely one spider species is found in the tea plantations with conventional farming, seventeen species are found in those with organic farming. Green treefrogs, the endangered endemic species in Taiwan enliven in the tea plantations transformed into organic farming.

CEO Su specifically showed gratitude toward corporations who have been adopted tea plantations for many years and have enabled Ching Yuan Project to be expanded up to now. He aspired that Ching Yuan Tea would become the most influential brand in Chinese organic tea and hoped that all walks of life would continuously pay attention to it.

Wen Lee, Chief of Agriculture Department of New Taipei City Government, stated that they shared the same goal with Tse-Xin, that is, to maintain environment as well as making healthy and delicious tea. The department also introduced activities of evaluating organic tea in Pinglin district to enhance the quality and value of tea in the hopes that more farmers would adopt organic and eco-friendly farming. Zhi-Hui Wang, Chief of Soil and Water Conservation Bureau in Taitung Branch hoped that Ching Yuan Tea Plantations developed concepts of the point of power, that is, there is hope that the lands, however small proportions they are in, will gradually be enlarged so that Fei-Tsui Reservoir will become an organic and eco-friendly environment.

●水保局台東分局長王志輝：祝福淨源茶不僅十周年，在品質通路都能十足的成功。Zhi-Hui Wang, Chief of Soil and Water Conservation Bureau in Taitung Branch: “My best wishes to Ching Yuan Tea to not only sustain for another ten years but achieve full success concerning quality and marketing.” 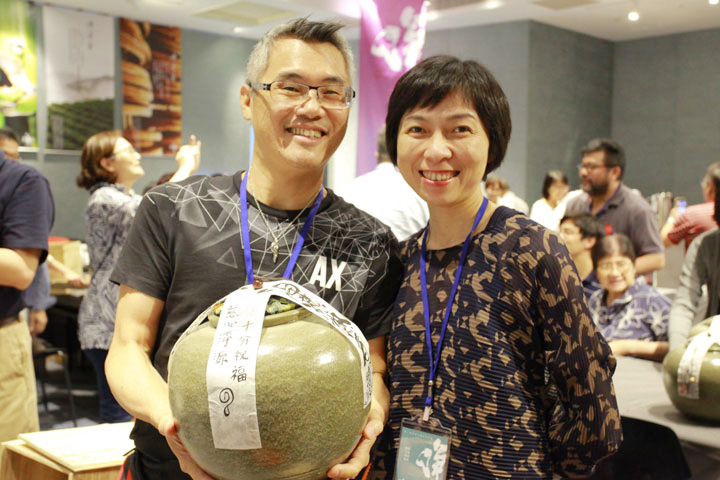 ●麥傑廣告創意總監陳進東(左)：堅持十年不易，相信未來淨源茶會帶給我們下一代更多對土地的友善與尊重，台灣會有更多好的茶品牌讓大家參與。Jin-Dong Chen, Creative Director of Magic Creative Design (left): “To persist for ten years is not easy. I believe Ching Yuan Tea will bring more kindness and respect of the land to our next generation. There will be more good tea brands in Taiwan for everyone to join.” 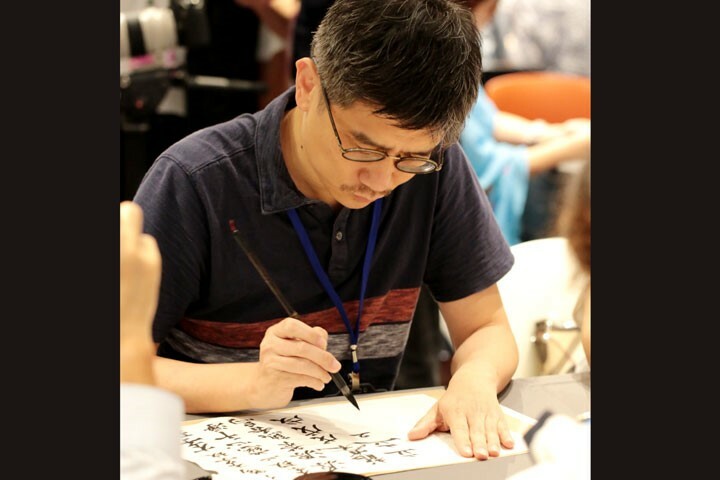 ●新北市農業局長李玟：農業局和慈心的目標一致，不僅致力維護環境，也創造出健康好喝的茶。Wen Lee, Chief of Agriculture Department of New Taipei City Government:” We share the same goal with Tse-Xin, that is, to maintain environment as well as making healthy and delicious tea.”​ 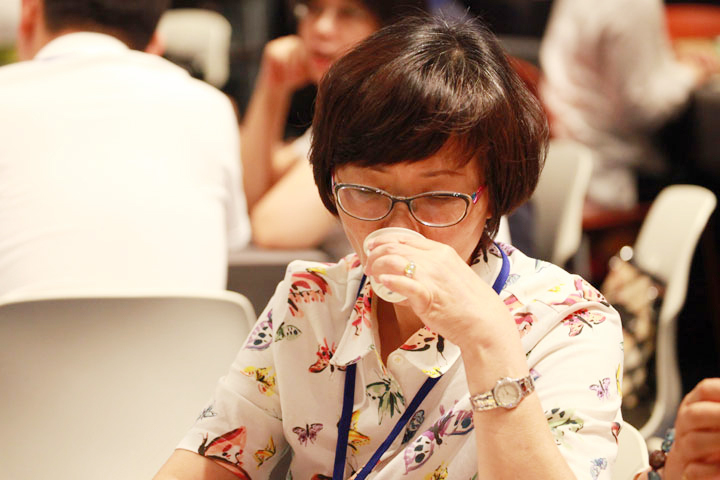 ●輝雄診所執行長許美華女士：五年前認養茶園是看到淨源茶需要很多人護持，茶農不使用農藥辛勤照顧茶園，烘培師盡心研究做出好茶，我無法種茶、製茶，但可以認養茶園來支持。Mei-Hua Xu, CEO of Imperial Clinic: “We adopted tea plantations five years ago as we saw Ching Yuan Tea need many supports. Tea farmers diligently take care of plantations without pesticide, tea roasters dedicate themselves to studying and making teas in high qualities. I do not know how to plant or make teas, but I can show supports through adopting plantations.”

The highlight of the event – “Tea Sealing” began. Most participants had their first experiences of this with great freshness and excitement. With guidance of A-Liang, a tea sealing master, guests used brush pend for calligraphy to write down their expectations to themselves and blessings to families and friends on fine writing paper made from sika deer’s favorite tree bark. Then, the writings along with Ching Yuan Tea were sealed in celadon pottery containers sophisticatedly made by experienced masters. At the end of the activity, the master asked participants to hold their hands and jointly and loudly called, “Hold Our Dreams High Up, God Will Lead Us!” This blesses themselves and their families to fulfill respective aspirations ten years later, and “Ching Yuan Project” will continuously recover lands and purify minds with collaboration of Tse-Xin Foundation and all walks of life!​ 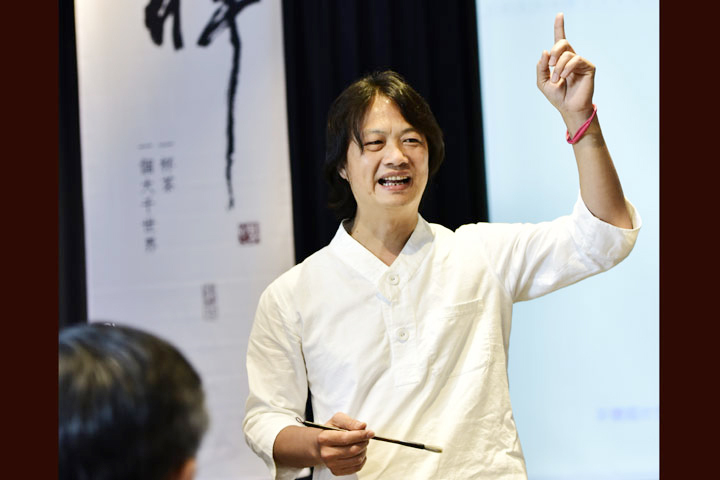 ●封茶師喜堂亮：「慈心基金會愛護土地、關心農友，也關心茶產業發展，付出相當多心力，要堅持下去，大家一定會追隨慈心的腳步，祝福淨源茶有好幾個十周年。」A-Liang, the tea sealing master: “Through loving and protecting lands, caring for farmers and paying attention to development of tea industry, Tse-Xin Foundation has dedicated a great deal. They must persist in the hard work, then people will follow their steps for sure. My best wishes to Ching Yuan Tea to celebrate anniversaries of the following decades.” 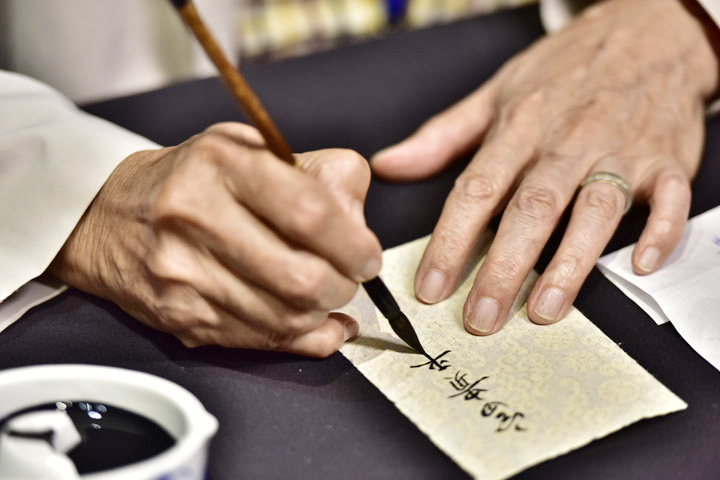 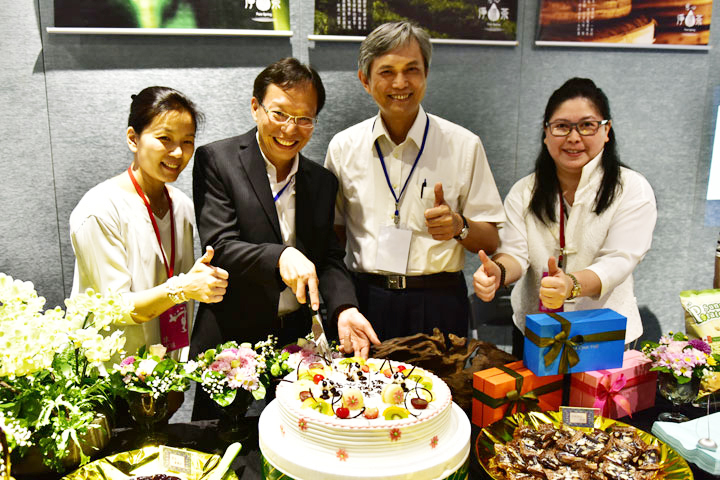 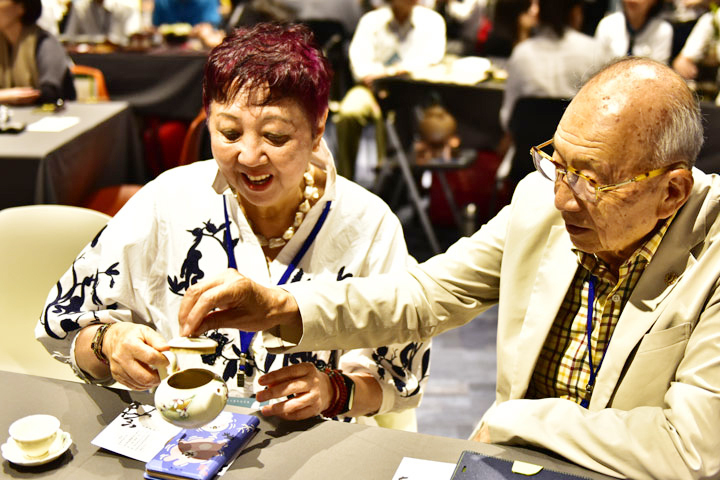 ●淨源茶推廣初期第一個支持的企業人士洪碩伯(右)：很高興來參與淨源十年，淨源茶是以非常正面的方向在進行，非常感謝慈心。Shuo-Buo Hong, the first entrepreneur supporting Ching Yuan Tea at the beginning stage of promotion (Right): “I am glad to participate in the first decade anniversary of Ching Yuan Tea, which has been progressed on an extremely positive path. I am very grateful to Tse-Xin.” 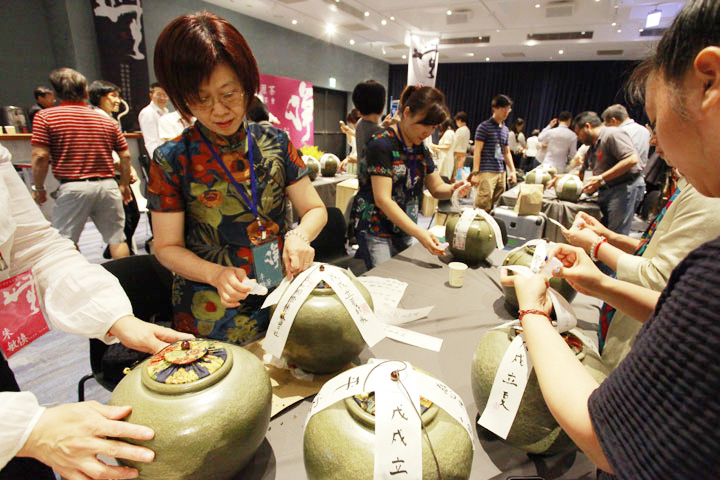 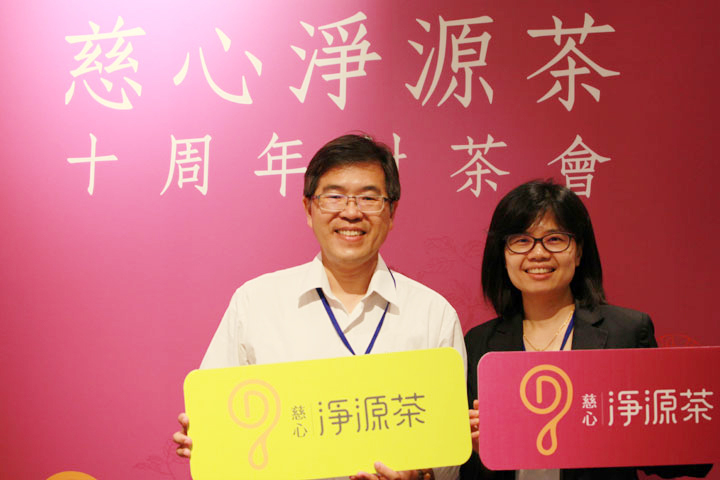 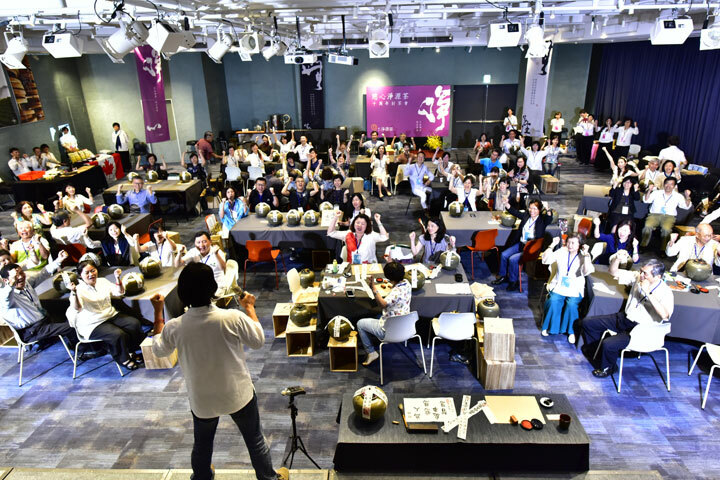 【封茶的意義】
The Meaning of Tea Sealing

“Tea sealing” was an etiquette and custom passed on from Taiwanese early culture. At the end of a year, intellectuals would seal the unfinished stored tea or new tea prepared to be gifted while writing down their own future hopes or blessings for friends. This is a cultural tradition of respecting Gods and appreciating one’s good fortune.

In China, tea sealing originated in Tang Dynasty. It is said that Emperor Qian Long visited southern areas of Chang-Jiang and was moved by a cup of tea in Hangzhou, thus he conferred a title upon tea trees for his use. Teas produced from those trees were bestowed to chancellors who followed their emperor to write a big red “blessing” later pasted on the container to pray for the good fortune of keeping and amassing blessings. Since then, tea sealing had been gradually spread to people and had become literati’s favorite tea activity. Tea sealing events have become popular in recent years in Taiwan, mainly focusing on sending blessings to families and friends as well as expectations to oneself. This embodies meanings of keeping the mind of appreciation, that of sealing memories, that of proving changes, and that of sustain tea scents. As a sealed tea easily awaits changes, time is the best tea maker. The procedure is similar to storing an alcohol called “daughter red” to show longing for a beautiful vision in the future. When opening the container several years later and reading the words written before, one will feel indescribably touched. Therefore, what tea sealing seals is more than tea but the appreciation and legacy of the land from the tea lovers.